UEFA Euro 2016 will be held in France from 10th June to 10th July. The freight opportunities for commercial companies are huge; in addition, the demand for consumables will peak as more than a million tourists are expected to travel to France, increasing the demand on freight companies, haulier and courier alike. Many fans and supporters will not have tickets to football matches but will merely want to visit France, soak up the atmosphere and experience Gallic culture - As a haulier or courier you may play a part in providing a great experience to the fans and supporters from across Europe as import and exports levels rise and fall during the Summer.

Nevertheless, freight traffic at Dover-Calais will peak as ferry capacity will be at maximum for P&O, DFDS, and the channel tunnel as tourists will use the ferries available rather than travel via airlines. Bear in mind in 2015 road traffic outside of Dover was at capacity and Operation Stack became the driver of control traffic. It may well be the same this year, depending on how well the Ports and Dover and Calais manage traffic. 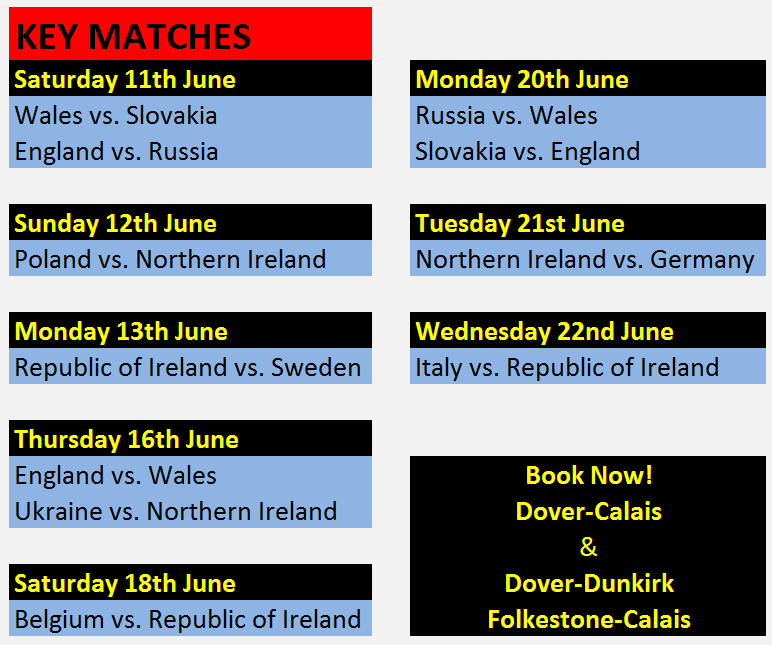 So book early and get your place - plan ahead to get a commercial ferry ticket:

24 nations will compete in Euro 2016, including England, Northern Ireland, Republic of Ireland and Wales - which means UK airports and ports in June and July will no doubt be very busy places. Not to mention it was 1958 the last time Welsh supporters enjoyed being in a football tournament, unlike England which regularly attends!

The main ferry ports across the coast of France, Belgium and Holland will be busy areas so booking now and planning your route for your lorry or van is perhaps the best move for your business as demand increases between now and Euro 2016's start.