Conor McGregor Vs Floyd Mayweather - Everything you need to know

Fight fever has taken over the Freightlink office! So much so, we thought about changing our name to 'Fightlink'.

If you’re not on the road this weekend and are thinking of watching the fight, we have put together a handy Sweepstake Kit for you and your friends to have a bit of fun with. If you still want more, here is everything you need to know. 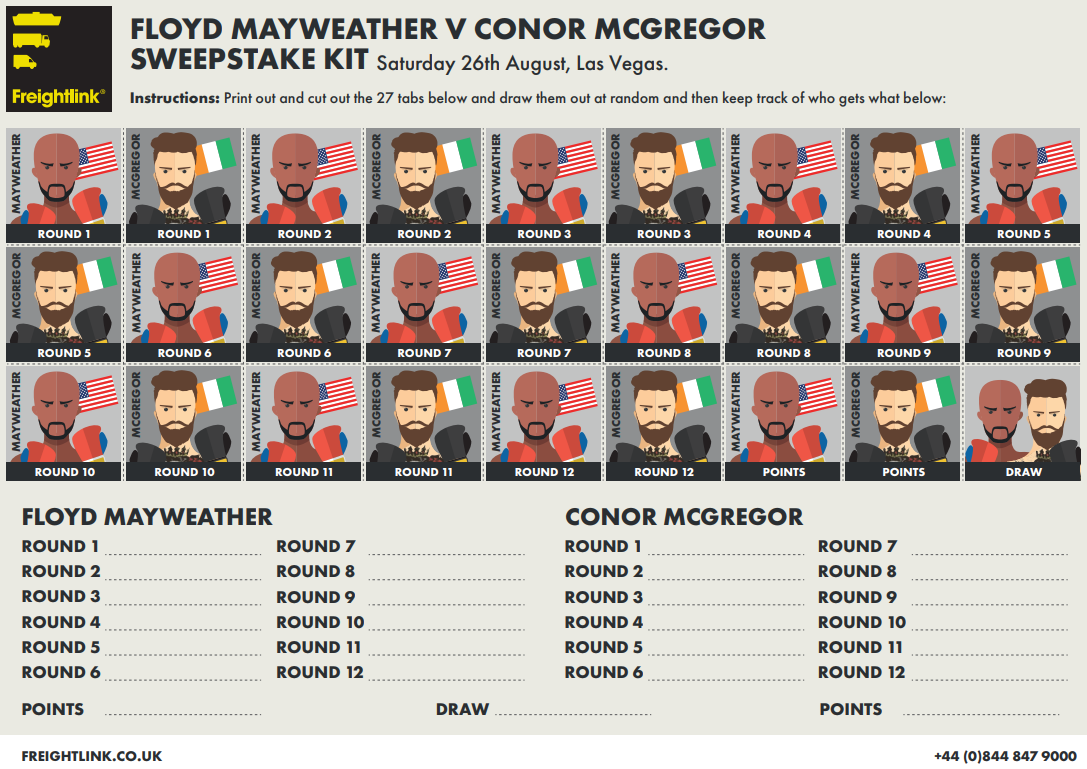 Where is the fight taking place?

The fight will be taking place in the T-Mobile arena on the Las Vegas Strip, Nevada.

What date is the fight and at what time?

The bout is happening on Saturday 26th August, and whilst the time has yet to be officially announced, it will be an early start or a late night for viewers in the UK. If you’re watching it live, expect to be up well into Sunday 27th August. The main event begins at around 4am GMT, but will not actually kick off until closer to 5am.

What are the rules of the fight?

Whilst McGregor is known for his UFC, the fight will be carried out under the rules of boxing. This could be a challenge for Mixed Martial artist McGregor and he faces off against one of the greatest defensive boxers who has ever fought. McGregor will also have to adapt to using 8-ounce boxing gloves as opposed to the smaller UFC boxing gloves, he will also not be allowed to use takedowns or leg kicks.

What have they said in the build up?

In the first stop of a four city media tour promoting the fight, Mayweather told the 20,000-strong crowd in Los Angeles:

"I don't care if it's a ring or it's an octagon, I will kick ass. I don't back down for anybody.

"You line them up and I will knock them down. On August 26, I'm gonna knock this out too."

"You haven't knocked anyone out in about 20 years."

"We talking about from the nineties to now, world champion 18 years, but it is no problem. I'm not the same fighter as I was years ago, but I got enough to beat you."

"You will wave that white flag. You are going out on your face or your back. Which way do you want to go? All you need to do is show up and I will do the rest."

"God only made one thing perfect, and that is my boxing record."

The Irishman was the crowd favorite at the opening press event where he made fun of Mayweather's IRS troubles. A lack of cash prompted his opponent to file an appeal with the IRS (Internal Revenue Service) regarding overdue taxes. He also promised to 'flatten' the aging fighter.

McGregor told the crowd of more than 11,000 people.

"He's in a track suit, he can't even afford a suit anymore."

"I am honored to be here, to give you this spectacle."

"His little legs, his little core, his little head, I am going to knock him out inside four rounds, mark my words."

"I am a young, confident, happy man that has worked extremely hard for this."

"I am just up here embracing everything. No-one can do anything to me. I am just enjoying myself and having a good time."

"He will be unconsciousness in four rounds. He has never faced this. I don't fear him."

What are the odds?

Almost straight away after the fight was announced, William Hill offered odds on Mayweather at 1-11. Currently, with only a few days to go, he is 2-9.

Oddsmaker Nick Bogdanovich stated that the odds would be even more in Mayweather’s favor if it wasn’t for a small deluge of bets from UFC fans.

"Realistically if we were just putting up a number and didn't have to take bets on it, Floyd would be 1/100," Bogdanovich said. "But this will be a very, very big betting fight for sure, one of the biggest ever."

What are their fighting records? 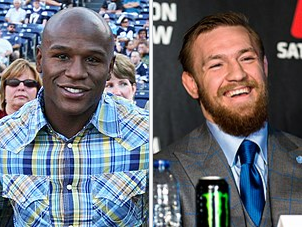 Floyd famously retired in 2015 with a perfect 49-0 professional boxing record, having only ever been knocked down once in his entire career.

He is described as one of the 'best defensive fighters' ever, is known to pride himself on his ability to evade punishment with his skillful movement and light feet in the ring. Making small adjustments all the time to get the better of his opponent.

Should Mayweather win, it would see him move ahead of former heavyweight great Rocky Marciano, who also retired with a perfect 49-0 career record.

Conor McGregor at the moment is the UFC’s lightweight champion and is formally a featherweight champion. He is known for his explosive knockout power, but from time to time he mixes it up with a bit of bravado.

At the age of 28, from Ireland, he became the first UFC fighter ever to hold two belts at the same time when he knocked out Eddie Alvarez in New York last November, which gained him the lightweight championship.

He is quick, but sometimes considered irrational on his feet. There's not many predicting he will beat one of the greatest fighters of a generation.

Who does Freightlink think will win?

There's a bit of a cult following for McGregor, a rags to riches story where people would like to see the boy come from nothing and go all the way to the top. However, Floyd is 49-0 for a reason and it should be a matter of when McGregor gets knocked out. McGregor's UFC fights do not often last long, and we are not confident of the Irishman lasting 12 rounds?

We're going for Mayweather KO-ing McGregor within nine rounds, or a win on points.

And who do you think will win?

Tell us who you think will win. And don’t forget to download your Freightlink Sweepstake Kit for the main event.

From your knockout team at Fightlink!