Infographic: How dependent is the UK economy on freight ferries?

Freightlink.co.uk is setting a standard in finding the best ferry freight quotes for small and medium sized business; primarily serving UK SME’s to project their own businesses further into the year ahead, freightlink is playing a key role in British economic recovery – demonstrated by the information available in the infographic. 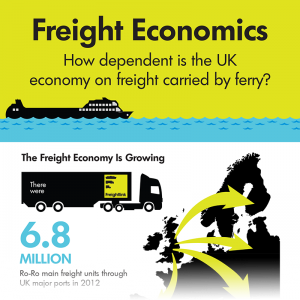 The UK freight economy is big business – the logistics industry is worth £74.5 billion to the UK.

In 2012 there were 6.8 Million Ro-Ro freight units passing through major UK ports including Dover, Liverpool and Belfast – that’s 7% higher than the previous year. Of these goods vehicles, 2 million were self-driven while 600,000 were unaccompanied trailers. 6% of the self-driven vehicles were UK registered, while 94% came from the European Union.

Indeed, earlier this year, according to research conducted by the British Chambers of Commerce, the BBC reported that UK exports are at an all-time high. This perhaps adds further proof to the notion that the UK is taking the centre stage in global trade with the rest of the world. In fact, after the Netherlands, the UK is the largest maritime freight transport country in Europe, handling 13.4% of the total volume of seaborne goods shipped by the EU-28 in 2013.

In tonnage terms, the UK had the largest quantities of goods transported on Ro-Ro mobile units in 2012 within the EU, again qualifying research by the BCC that exports are improving. This further goes some way to mitigating comments made by Chancellor George Osborne in setting, what was considered too ambitious a target of doubling annual exports to £1trillion by 2020.

Arguably, perhaps the Treasury’s setting of this 2020 fiscal target may be achieved after all; considering some amazing freight ferry industry facts are available such as DFDS Seaways making 14524k channel sailings in 2013 – covering a distance of 435k miles or a journey to the Moon and back; or during 20 years of service the Eurotunnel freight shuttles have transported the equivalent of 1.1 million Eiffel Towers in cargo!

In conclusion, all this adds positive light and indeed evidence that logistics is the backbone of the UK economy, providing the efficient, cost effective flow of consumer and manufacturing goods on which all other commercial sectors depend. Daily, British ports are handling 95% of the imports and exports serving the manufacturing, retailing, and hospitality and service industries, making for a vibrant, healthy, market mixed economy. This is the reason why the UK is such a huge globally desirable place where foreign investors want to do business and acquire control of British global brands.

In January the International Monetary Fund (IMF) raised the prospects of the UK by forecasting its economic growth would be higher than of any of its EU partners such as France, Italy, and Germany. Indeed by Q2 the UK would only be outstripped in Europe by Russian economic growth (despite itself becoming subject to economic sanctions over the Ukraine crisis).