Is it time for a face lift for your courier business? Looking for an upgrade for your ‘04 dinged banger? We’ve got you covered with some of the new vans on offer for 2019.

As the world becomes more aware of its carbon footprint, so too does the commercial vehicle market. As a result, we weren’t surprised when this year’s hotlist included a number of hybrid/all electric models.

This year, new laws mean any diesel van which does not meet the Euro 6 Emission Standards will have to pay a daily charge of £12.50 when travelling within the ULEZ (Ultra Low Emission Zone) in London.

By 2020, most major cities are expected to follow, making a non-efficient vehicle an enormous financial drain. So, now is a good time to consider swapping your vehicle for something both more financially and more environmentally viable.

Here is what to expect in the commercial van world this year.

Due for release in late Autumn, the Ford Transit Custom PHEV will be the first plug in hybrid van on the market.

Ford estimates the standard van will be able to travel for 30 miles on electricity power before the standard engine takes over, making it ideal for shorter journeys.

The vehicle offers the same 6 cubic metre capacity, meaning the improved efficiency has no impact on its load capability, offering drivers the best of both worlds.

If you travel in and around the London congestion zone, the PHEV is the perfect van. Although initial costs for the van are higher than standard, drivers will save on fuel costs and London’s Congestion charges as the low carbon dioxide emissions of the van deem the vehicle exempt from such charges.

Ford have also announced the new transit will have refined geofencing technology, meaning drivers will be able to specify areas for their transits to automatically switch to electric power.

This will become especially useful when other areas of the country also follow the new Emission Standards law.

Although there has been no official release date, Vauxhall have announced the completion of their new model in the Vivaro range. Set to rival the Citroen SpaceTourer, it offers a similar sizing, dimensions and load capacity.

The van will be available in three different engine sizes, including a 148bhp and a 178bph 2.0 litre, a less powerful 118bhp, 1.5 litre. A new PSA IntelliGrip traction control system replaces the old 4x4 steering, providing greater security to the vehicle on loose surfaces.

The Vivaro is very versatile in terms of load capacity. All nine available seats are fitted on aluminium rails, allowing them to be adjusted for maximum adaptability, offering space for items up to 3.5m long.

Removing all seats allows for storage of up to 3,397 litres and a weight capacity of more than one tonne.

An array of assistance technology is also included in this model; a first for the Vivaro Range.

The Vivaro also offers a unique level of comfort, with upgrades including front seats with heating, a massage features and a removable table with a 230v power source.

The second model to be announced for release in 2019 by Ford, the Transit has undergone a major facelift compared to its predecessors.

The new transit is set to go on sale in the middle of this year and has been issued with a new design (now bearing a three-bar grille) similar to the transit custom. The upmarket look is also joined by a new chrome trim, xenon headlights and LED running lights, whilst retaining its current dimensions.

It also features a totally new engine, offering an even better level of efficiency when compared to the 2.0 EcoBlue diesel that was introduced in 2016. Models available are 104bhp, 128 bhp, 168bhp and a new 182bhp, which are suitable for all different kinds of transportation requirements.

Additional technology also features a stop-start engine, electric power steering to improve efficiency further and a six-speed manual gearbox as standard. From 2020, a 10-speed auto will also be available in rear-wheel-drive transits.

The transit will also include the innovative feature of a 48 volt micro-hybrid system, the first of its kind to appear on such a large van. The mHEV system is designed to improve fuel economy, opposed to making the transit any faster, boosting its efficiency by an estimated 3%.

The new Mercedes model is heralded as the company’s first all-electric vehicle and with a potential of 93 miles per charge makes it the ideal choice for urban use.

Expected to retain an 80% charge from a 45-minute boost, the eVito has no reduction in load capacity compared to its predecessor. Models include long and extra-long wheelbases, with a volume of 6.0 and 6.6 cubic metres respectively. Both vehicles will be able to carry a weight of 1,000 kg and provide a minimum of driving distance of 60 miles between charges.

A smaller model is set to be released when the market calls for such a demand.

Aside from producing much quieter emissions, the electric eVito is expected to provide a very similar drive to the standard Vito range, whilst including several improvements such as more sensitive braking.

The eVito is is expected to retail around £40,000 including VAT and set to hit to market later this year. 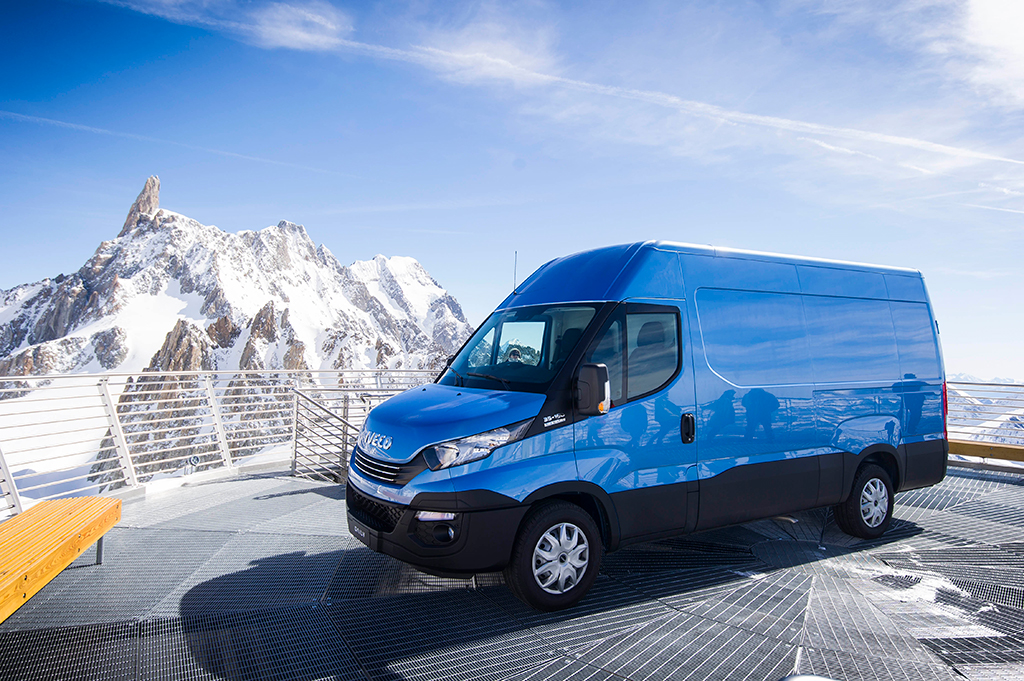 The Iveco Daily is set to receive a face lift this year. The classic Daily made its appearance on the roads back in 2014 and very little about the actual vehicle is set to change.

Iveco have been holding their cards close to their chest about their new designs, however we expect great things from the new model, whilst retaining its current load dimensions.

Hot on the tails of its smaller counterpart, the e-Sprinter joins Mercedes first range of all-electric vehicles.

The van will be available with two battery back options - a longer ranged 55kwh and a smaller 41kwh with a 71 mile range (115km).

The panel van retains typical Sprinter design with a vehicle length of 6 metres and a maximum load capacity of 10.5 cubic metres.

Expected to reach the market by the end of the year, the e-Sprinter is due to retail at around £50,000 including VAT.