Easter celebrates the resurrection of Christ, but it’s also a good excuse for a long weekend away and lots of chocolate eggs. But how do they celebrate Easter in other countries? Let’s take a look. 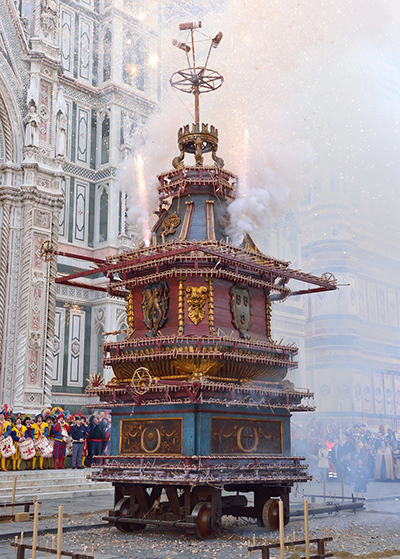 Residents of Haute-Garonne in Southern France (approximately 5 hours from the port of Santander) will be taking to the streets for their breakfast this Easter. Exactly 15,000 eggs will be cooked in a giant pan to feed 10,000 hungry onlookers.

The tradition is said to date back to Napoleon Boneparte, who visited the area and enjoyed the eggs so much, he commissioned a giant omelette to feed his troops. The event, which is dubbed Brotherhood of the Giant Omelette, has been an annual event since 1973.

Preparation sees fifty volunteers working tirelessly for an hour and a half to get all the eggs in the pan. It’s a cracking day out.

Czech Republic - Whip up a frenzy

Easter Monday in the Czech Republic sees boys take to the streets with pussy willow branches, which they use to whip girls round the legs and even douse them in water. This is a practice said to bring good health and protect against illness for the upcoming year.

In response, the girls then award the boys with sweets and money for their efforts and send them on their way.

The tradition is mainly celebrated in small towns and villages, but don’t worry any visiting ladies, you must consent to the whipping first.

Halloween; so much fun they have it twice.

Easter Sunday sees the children of Finland have a practice run for trick or treating. If you open your door on Easter Sunday you’ll be faced with a herd of witches at your door who will bless your home by waving their twigs in exchange for a chocolate bar.

Every Easter Sunday sees the ‘Scoppio del carro’. This is quite literally the explosion of the cart, an event where a historical cart is loaded with fireworks and explodes in front of thousands of onlookers.

The ceremonial cart is pulled through the streets by a pair of oxen to the cathedral where fireworks are set off to celebrate the resurrection of Christ.

The tradition dates back to the eleventh century when the returning prince of Florence brought back three flints from the Holy Sepulcher during the First Crusade of the Holy Land. Said flints are still used to light the fire each year.

Join onlookers and watch your sins go out with a bang as you start the new Christian year with a clean slate.

Spain - Their dancing is deadly 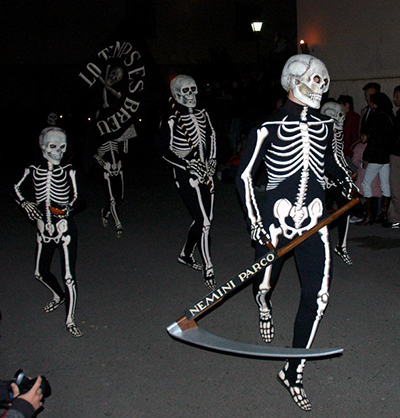 The Spanish Dansa de la Mort, or Death Dance sees locals in the municipality of Verges (90 minutes from the port of Barcelona) dress as skeletons to dance the night away on Maundy Thursday.

Part of the larger Procession of Verges, which turns the story of the life and resurrection of Jesus Christ into a theatrical street performance, the Dance of Death is the last remaining festival to encompass the Western European tradition of the dancing to combat death.

This genre of dancing (yes, this is classified as its own genre) became a popular way to fight off the plague in the Middle Ages. Today, it features five skeletons dancing in the formation of a cross to the beat of the drum. One carrying a scythe that bears the inscription ‘death forgives no one.’

If you are in Corfu over the Easter weekend, make sure you’re equipped with ear defenders, high visibility jacket and a hard hat.

At 11am on Easter Saturday at the sound of the church bells, every man, woman and child is invited to hurl a piece of pottery out of their window into the street below.

The crash is supposed to represent the earthquake that followed Jesus’ resurrection. The tradition was started by the Venetians who would throw old pottery out of windows on New Year’s Eve in a hope to receive good fortune over the course of the year.

“When the bells start a’ringing, make sure you get a’flinging.”

Bulgaria - Brings a new meaning to the egg and spoon race

Bulgarians don’t hide their eggs, they fight them!

In a bizarre game of chicken conkers, competitors boil and dye eggs to fight against each other. By tapping their eggs against other eggs, the victor is the person with the last egg standing. The egg is then traditionally kept until the following year as a symbol of good luck.

The practice dates as far back at the fourteenth century. The egg represents Jesus’ tomb and his resurrection. The custom has travelled far and wide, being a beloved tradition in Europe and the Americas.

Give it a go at home and see who has the most cracking shot amongst the family.

If your Easter Bank Holiday is looking a bit dull, take a tip out of the European’s book and find an alternative way to celebrate. However, we wouldn’t advise whipping the lady down the road with a twig, it won’t end well! Happy Easter!