What is MARPOL and its impact to the freight market?

UPDATE As of the 1st January 2015, maritime shipping levels are now subject to MARPOL directives.

An interview with Mark Stephens, Director at Freightlink.

There’s been a lot reported in the press about MARPOL recently. Is it really something to be worried about?

Mark: A MARPOL regulation, also called Sulphur Directive, is something which the European politicians have been pushing for a number of years to clean up the ferry industry. The first steps to introducing the sulphur restrictions in fuel came into force in 1993. The amount of information regarding MARPOL may cause uncertainty and fear among business users of ferry transportation because of its complicated nature, with many stories in the press potentially adding to the confusion. However, not everything has been established yet. Most ferry operators still haven’t announced their plans for the new rules in force from 1st January 2015. A lot of important information is still to come. 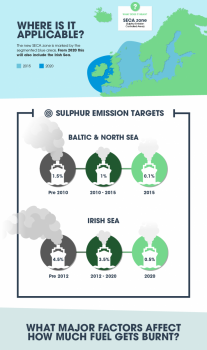 So what exactly is MARPOL?

MS: MARPOL stands for Marine Pollution and is the International Convention for the Prevention of Pollution from Ships. It’s a European Union and International Maritime Organisation directive requiring ferry companies to lower the sulphur percentage in fuel from 1%, applicable at the moment, to 0.1% by 1st January 2015. It’s a bit like being told to use super unleaded in your car, rather than unleaded. The basic rationale is to decrease the carbon footprints of ferries, ultimately aiming to improve air quality in Europe, because ferry engines contribute to the pollution levels. The regions affected are known as the Sulphur Emission Control Area (SECA). Ferries which operate within these areas have to make significant changes to their fuel systems in order to comply with these new regulations. These changes can be switching to a more expensive reduced sulphur fuel such as Marine Gas Oil, fitting fuel “scrubbers” to the ship (with a cost of around €5 million per ship) or completely switch to Liquefied Natural Gas (LNG) fuel systems. The latter option is primarily being chosen by ferry operators who have commissioned brand new ferries to be introduced in coming years. All of these changes have an impact on the ferry companies who are left with little choice but to pass the additional costs onto their customers.

Which countries and areas will be affected?

MS: If you draw an imaginary line from Lands End (UK) south to France, the directive will affect everything east of this, including the English Channel, North Sea and Baltic Sea regions. From Freightlink’s point of view this will impact most European countries and many ferry routes.

Is it just the European Union?

MS: Russia also co-signed the bespoke directive as it applies to their Baltic Sea areas. Similar directives have been introduced by the USA and Canada. Also, the United Nations are considering expanding Sulphur Emission Control Areas (SECA) in the future, possibly by 2020. This is still to be decided.

What areas won’t be included in this directive?

MS: At present, all Irish Sea and Mediterranean Sea ship operators are not affected so their customers can rest assured that they will not be subject to the additional costs. The Mediterranean area is, however, being considered for 2020. The western cost of France, Spain and Portugal are not in SECA either. Eurotunnel, who operate Folkestone (UK) to Calais (France) are also unaffected because the trains run on electricity.

What are the expected outcomes of MARPOL?

MS: We are still waiting for ferry operators to declare their final intentions. As noted above there are 3 main alternatives:

Firstly, new engines or ships with dedicated technology. Brittany Ferries have already placed an order for a new LNG ferry costing around €270 million and due to enter service in spring 2017.

The second option, which has been popular with ferry companies, is to fit scrubbers to clean the output gasses, similar to a catalytic converter to a car. This system cleans the gasses generated by the engines, which enables the ships to continue burning lower grade fuel, but achieve the .1% sulphur output levels. The scrubbers are retro fitted, but are extremely expensive and are not compatible with all vessels. DFDS Seaways, for example, are investing €100 million in scrubber systems on 21 of their vessels.

The final option is to burn cleaner fuel – Marine Gas Oil (MGO) instead of heavy fuel oil (equivalent of super unleaded for cars) which has a current cost difference of around $300 per tonne.

The full effects of this directive are yet unknown. DFDS have already announced the closure of the Harwich-Esbjerg route. Several ferry companies have declared other routes are “at risk” of closure. However, similar to the automobile industry, it might also trigger the development of new technologies in fuel production and a whole new way of ecological thinking about fuel consumption.

What’s important for companies using Freightlink, how they will be affected?

MS: First of all, I would like to assure all customers that we will introduce only the necessary price changes dictated by freight ferry operators. This is a whole of the market increase, which will affect both the passenger and freight markets going forward in 2015 but each operator will calculate their additional charges differently. In the end the whole freight industry will be affected at some point. We will make sure our customers are kept up to date with every change as soon as we are aware of it.

If you have any questions about the affect MARPOL may have on your business, drop us an email.

Click on the image above to see the MARPOL infographic in full.

01 January 2015
Tags:
MARPOL
International Convention for the Prevention of Pollution from Ships
Freightlink