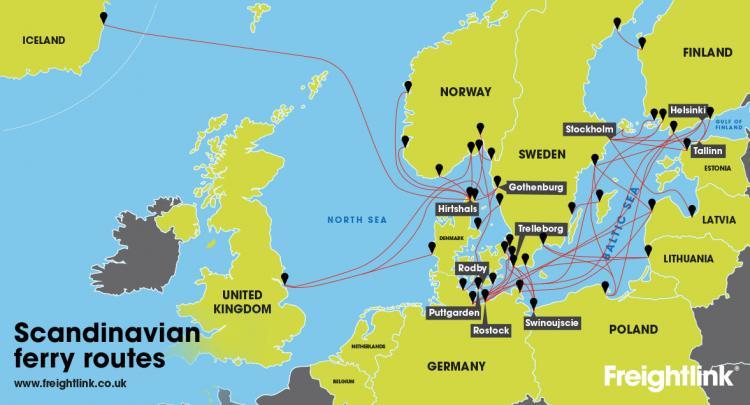 There are no direct freight ferries from the UK to Finland, however the extensive road network across Europe means that there is a great deal of flexibility in the options you have to get to there.

For vans the most popular driving route is via Germany, Denmark and Sweden. This means that first of all you would catch a cross-channel ferry or Eurotunnel (Dover-Calais, Dover-Dunkerque, Folkestone-Calais) all of which have multiple sailings per day. Then, drive up to Puttgarden in Germany and catch a ferry over to Rodby in Denmark. Once you are in Denmark you have the option of the ferry from Helsingor to Helsingborg, or driving across the Øresund bridge from Copenhagen to Malmo. Both Puttgarden – Helsingborg and Puttgarden – Malmo can be bought as one transit ticket, and all these ferries run up to 50 times a day.

Once you are in Sweden it is then a case of making it over to Stockholm and catching a ferry to Turku or Helsinki with either Tallink Silja or Viking Line. The Turku ferries are popular as they are usually a little cheaper and quicker, and sail twice a day. Turku is around 100 miles north-west of Helsinki which makes it an ideal port for deliveries or collections in the western part of Finland. The other option to hop across from Sweden to Finland is Kapellskar to Naantali which takes about 9 hours and goes three times a day.

Larger vehicles, such as artics, may prefer some longer ferry crossings to reduce some of the driving time to get to Finland. There are two main options here.

Firstly, you could get a longer North Sea crossing from the UK to the continent. Options here might include Immingham – Gothenburg, Immingham – Esbjerg or Harwich – Hook of Holland. From there you could follow a similar route through Denmark and Sweden.

Alternatively, there are direct ferries from Germany to Finland. This means you could have a short ferry or train across the channel, then drive through to Rostock or Travemunde to get a ferry to Helsinki or Turku. There is a wide choice of crossings across a week on these routes, which can take around 36 hours and are operated by Finnlines and Swedish Orient Lines, so it is always worth seeing if there is one which suits your needs.

Other ferries to Finland leave from Estonia and Poland which are more suited to those vehicles travelling from the east of Europe.