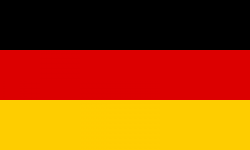 Germany (or as it is officially known, the Federal Republic of Germany) is a federal parliamentary republic in central-western Europe. It comprises 16 States, and covers an area of 357,021 square kilometres (137,847 square miles). It has a population of approximately 82million inhabitants.

Germany is the most populous member state of the European Union. Berlin is its capital city. The main urban areas are: The Ruhr, Hamburg, Munich, Cologne, Frankfurt, Stuttgart and Düsseldorf.

Germany was a founding member of the European Union in 1993 and is part of the Schengen Area as well as became a co-founder of the Eurozone in 1999. Moreover, Germany is a member of the United Nations, NATO, the G8, the G20 and the OECD.

With its central European position geographically, it naturally has many European neighbours. It borders Denmark to the North, Poland and the Czech Republic to the east, Austria to the Southeast, Switzerland to the South-southwest, to the West lie France, Luxembourg and Belgium as well as the Netherlands to the North-west.

Germany only has one direct ferry route which links it to the UK - the Cuxhaven to Immingham ferry route offered by DFDS North Sea. The route is served by a 12 driver Freight vessel. Tickets are for the specific sailing time and date.

Alternatively, the traditional method that most freight drivers employ is sailing from Dover to Calais or Dunkirk. It is worth noting that Dunkirk is the better option geographically speaking, as it saves you both time and fuel compared with driving from Calais.

Important rules to consider when driving in Germany

When driving on the autobahns there are a number of key things that you need to consider in order to be safe.

Items you must have in your vehicle

In winter it is also advisable to carry:

Speed limits are a maximal permissible speed of 50km/h within inner cities and 100km/h on the outskirts. On motorways and highways it is acceptable to drive faster. Everything else will be indicated via signposts. The main point to consider is that the driver should only drive at a speed which corresponds to his or her competence and is within the vehicles capabilities. On Single-lane carriageways the maximum permissible speed for a vehicle weighing between 3.5 Tonnes and 7.5 Tonnes is 80km/h. For Lorries weighing over 7.5 Tonnes the maximum permitted speed on main roads and federal highways with one lane is 60km/h. On motorways Lorries are allowed to travel at 80km/h, under certain circumstances such as according to the technology of the vehicle the speed limit on motorways is 100km/h. It is recommended to drive a little slower on motorways in order to avoid any on the spot fines. Please also note that Lorries and Artics are subject to the whims of the weather, in this instance if the weather conditions are poor such as: during foggy conditions, heavy rain or snow then the maximum permissible speed is reduced to 50km/h.

They cause immoderate using of roads and therefore, they require special permission according to article 29 (3) StVO. The basis for this permission is an exception permit pursuant to article 70 StVZO.

Freight escort vehicles or a police escort may be required, dependant on the size of the transported cargo. Such transportations are usually only permissible at certain times. During holidays the use of several motorways is principally impossible. This is then known as “off-time”. Oversize transports are only permitted to travel between Monday 9am and 3pm. Nearly all transportations with a width above 3.2 meters have to take place between 10pm and 6am at night. Oversize transportation must have a valid permit which must be obtained form the authorised regulatory agency. All information about the load to be shipped, registration numbers, axle distances, and axle loads, number of wheels and route description must be provided. 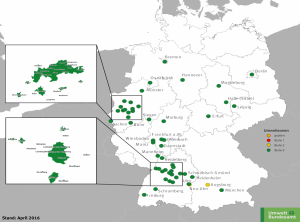 Like many other European countries now, Germany has a number of Low-emissions Zones throughout many major cities, regions. All vehicles ranging from cars, to buses to Lorries are affected by these emissions zones. Only motorbikes and other 3 wheeled vehicles, work machines, agricultural and forestry tractors, mobile machines, old-timers and mobility scooters are exempt from these regulations. The low-emissions zones themselves are intended to improve local air quality, thereby reducing the effects on peoples overall health. Failure to comply with these regulations will result in an €80EUR on the spot fine.

If there is ever a requirement to contact the emergency services, such as in the case of an emergency the following numbers are recommended. However, it should be noted that 112 acts as a general emergency services number in a similar fashion to 999.

If you have the opportunity on your journey, check out some of the 100 Best Things to do in Germany. This is a fantastic list of places to visit when you have some down time.