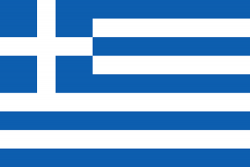 The Southern European country of Greece with Athens as its capital has a population of around 11 million people. Greece borders Albania to the North West, Macedonia and Bulgaria to the North, Turkey to the North East and to the West / South West lay the Ionian Sea and the Aegean Sea to the South / South East.

A predominantly mountainous country (80% of the land) and a coastline of some 8500 miles and 1400 islands of which 2227 are inhabited Greece is a member of the E.U. and within the Euro currency zone.

Greece was badly affected by the 2010 debt crisis which lead to IMF backed loans and stringent austerity measures. It is anticipated that the Greek economy will show the first signs of positive economic growth in 2014 – the first growth in 5 years.

Ferries play a large part in the transport infrastructure of Greece due to the number of island communities and its shipping industry heritage which developed due to Greece’s geographical position at the gateway to Europe, Africa and Asia. Regular ferry services run between the Greek mainland and the islands and between the Greek ports of Igoumenista and Patras and the Italian ports of Venice, Ancona, Bari and Brindisi. These routes are operated by a number of ferry operators including Grimaldi Lines, Anek Lines, Minoan Lines, Superfast Ferries and Blue Star Ferries.

Couriers, van operators, lorry and truck drivers must carry with them a passport or national identity card, full international driving licence, a letter of authority to drive along with original vehicle documentation, insurance papers and green card. A nationality plate must also be affixed to the vehicle. Drivers should also be aware that fines are imposed if the following are not adhered to – the use of head light beam deflectors, the carrying of a warning triangle, fire extinguisher and first aid kit. The wearing of seat belts is compulsory and hand held use of a mobile phone is forbidden. The legal limit regarding alcohol is 0.05% (0.25 per litre of breath) and failed breath tests can lead to penalties including imprisonment and licence withdrawal. Traffic offence fines are not payable on the spot but if they are not paid within 10 days from the date of the offence then legal proceedings will commence. E.U. drivers hours and records rules apply in Greece.

Any vehicles operating in excess of the above require authorisation from:

There are no driving restrictions on Sundays or Public Holidays in Greece but at Easter and during the summer holidays local restrictions are applied to motorways and holiday routes.

In the event of emergency, couriers, van operators, lorry and articulated truck drivers should take note of the following useful numbers: