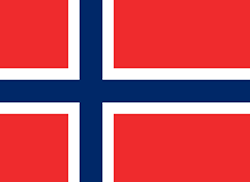 Renowned for its extensive fjord strewn coastline Norway is Europe’s most wholly northern country. Sharing a border of over 1000 miles with Sweden, Norway also share land borders with Russia and Finland in the North. With Oslo as its capital, Norway has a population of just over 5 million, is rich in natural resources of gas, petroleum and minerals and boasts one of the highest per capita incomes in the world.

There are frequent ferry services operated by Colorline between Hirtshals in Denmark to Larvik and Kristiansand in Norway as well as routes between Stromstad, Sweden and Sandefjord, Norway and from Kiel, Germany to Oslo, Norway. Fjord Lines operate from Hirtshals in Denmark to the three Norwegian ports of Bergen, Stavanger and Langesund. Stena Line sail between Fredrikshavn, Denmark into Oslo also but there is only one direct service from the UK which is from Immingham to Brevik and is offered by DFDS.

Not being a member of the European Union Norway operates its own currency, the Norwegian Kroner (NOK).

Couriers, van operators, lorry and truck drivers should, whilst driving in Norway, ensure they carry a full passport, international driving licence and a letter of authority to drive from the vehicle owner. If drivers follow the EU driver’s hours and records regulations then they should not encounter any problems whilst in Norway. Green card insurance is recommended, original vehicle registration and roadworthiness certificates must be carried and a nationality plate requires to be fixed to the rear of the vehicle. Whilst not a member of the EU Community, transit documentation is accepted and no permits are required for UK vehicles. It must be noted that all vehicles must clear customs on entry to Norway.

Across Norway there are a number of toll roads, operated by varying operators. An Auto PASS electronic fee collection system can be purchased for under £25 (200NOK) and offers discounted tolls as well as ease of transit. Further details are available from autopass@vegvesen.no.

In addition to tolls, diesel tax is also imposed in Norway. One is in the form of a low tax green coloured diesel for agricultural and marine activity whilst regular diesel is taxed at 2.72NOK per litre. Improper use of low tax green diesel carries a fine of 30000NOK (in excess of £2500). Up to 600 litres can be brought into Norway free of duty.

Vehicle weight and dimensions restrictions are relatively non-onerous with a width restriction of 2.55m, lengths of 12.4m for rigid lorries, 17m for articulated trucks and 18.5m for road trains. Two axle rigids have a weight restriction of 19.5t, 3 axles 26t, and depending on axle spaces, this can increase to a maximum of 31t. 3/s axle articulated trucks are restricted to 29.5t whilst 5/6 axles can the limit 46t. Road trains are restricted at 50t maximum. Whilst no height restrictions are in place couriers, van operators, lorry and truck drivers should be aware that there are a number of bridges and tunnels in Norway. Any deviation to the above must be directed to the NPRA who will also supply a map detailing the low bridges and tunnels.

The NPRA (address above) can also advise on ADR rules as in addition to the ADR agreement Norway has additional rules due to the large number of road tunnels across the country.

Speed limits are standard and dependant on the nature of the road. All vehicles are restricted to 50 km/h in built up areas and outside these areas, unless indicated otherwise, the limit is 80km/h.

The driving of any courier van, lorry or truck is not restricted at weekends or on public holidays. Due to the severity of the winters in Norway however restrictions are put in place at times of bad weather. Due to the winter weather conditions vehicles over 3.5gvw must carry the correct number of snow chains. The winter period can, depending on region, start as early as 16th October and finish as late as 30th April. If the vehicle is likely to travel on snow and ice affected roads then winter tyres are required.

Couriers, van operator, truck and lorry drivers should also note that dipped headlights are a 24 hour requirement, warning triangle and reflective jackets must be carried. The reflective jacket must also be accessible to the driver from his driving seat. The use of a mobile phone whilst driving is forbidden and lorries must have visually aided reversing equipment fitted.

In the event of an emergency the following numbers are used:

Additional advice on any transport matters in Norway can be requested from: