Ferries of the Eastern Mediterranean Sea

The expansion of the eastern Mediterranean sea lanes is putting the eastern European countries on the map.

With new developments such the strengthening of Genoan sea links through the Motorways of the Sea concept, the proposed gas expedition to release some of the 122,378 billion cubic feet of gas beneath the Levantine Basin and the ongoing ‘energy triangle’ between Israel, Cyprus and Greece, the Eastern Mediterranean is no longer just a holiday destination. 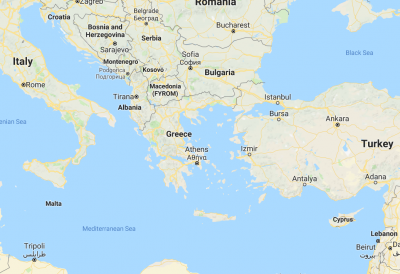 Ferry companies make such expansion of trade possible, enabling transport links with other areas of the globe.

Amongst many of the ferry operators we have the pleasure to work with, we work with a number of Eastern Mediterranean carriers, including:

Alternative Transport operate ferries between mainland Turkey and the rest of Europe.

Blue Star Ferries, a member of the Attica Group was founded in 2000. Ferries sail from mainland Greece to the neighbouring Aegean Islands.

Salamis Lines are a freight ferry company who provide a weekly Ro-Ro service between Greece and Cyprus.

The Grimaldi Group is one of the largest shipping companies in the world. Its founding year of 1947 also makes it one of the oldest. The conglomerate of sub-businesses, including Grimaldi Lines, Minoan Lines and Malta Motorways of the Seas make up a great number of the ships which travel through Eastern Mediterranean waters.

Most recently, Grimaldi have announced the investment in six new hybrid vessels, which have the potential to become the first fleet to be completely emission free.

Minoan Lines – Founded in 1972, Minoan offer one of the largest freight services in the Mediterranean between Greece and Europe with 3,000 lane metres per vessel and ultra-modern and luxurious high-speed ferries for professional truck drivers.

Superfast Ferries – Another member of the Attica Group, the Greek based Superfast Ferries offer several ferry routes through the Adriatic, Aegean, North and Baltic seas all the way into the Med.

Jadrolinija - A Nationalised Croatian shipping company, Jadrolinja are one of the oldest names on the Mediterranean having been founded after the Second World War in 1947. Offering connections between the Croatian islands to the mainland they offer both passenger and cargo transportation services.

Shipments to and from the Mediterranean have also allowed the area to expand socially. A number of yearly activities include the traditional Festival of Assumption on August 15th and the enlightening Free Earth Festival in Haldiki between the 23rd and 27th August.

Give the Eastern Meditteranean Sea a look in – we highly recommend it! Where do you want to go?