High Tide, Low Tide - How Does a Ferry get to the Port?

Have you ever wondered how a RoRo vessel connects quickly and efficiently to the port shoreline no matter at what time during the day or night it arrives or leaves the port? Well, it isn't as straightforward as you might think, especially when you have a tidal range that might see ships' decks rise and fall by as much as up to 10 metres from one visit to the next, between high and low tide.

The highest tides in the world can be found in Canada at the Bay of Fundy, which separates New Brunswick from Nova Scotia. At some times of the year the difference between high and low tide in this Bay is 16.3 metres, taller than a three-story building! Ports closer to home such as Holyhead may have a tidal range of up to 6 metres, while Liverpool boasts nearly 10 metres. Immingham on the east coast may see over 7 metres from time to time. 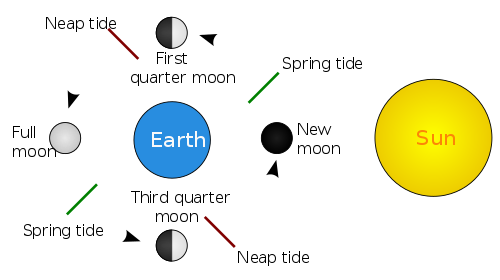 The biggest tidal ranges that take place are called Spring Tides. They actually have nothing to do with the seasons. They occur around the times of new and full moon when the Earth, Sun and Moon are in line. Seven days after a spring tide, the sun and moon are at right angles to each other. When this happens, the bulge of the ocean caused by the sun partially cancels out the bulge of the ocean caused by the moon. This produces moderate tides known as Neap Tides, meaning that high tides are a little lower and low tides are a little higher than average. Neap tides occur during the first and third quarter moon, when the moon appears "half full."

But whatever the planets and stars are doing ships need to connect to the shore for loading and unloading without any interruption. The ramp that sits on the ship's deck at one end and is attached to the shore on the other is called the Linkspan. Linkspans (or shore-ramps) come in all shapes and sizes. Some even connect to massive floating pontoons such as can be seen in Killingholme, a tidal port on the Humber. These huge structures rise and fall with the tides to provide a floating island to which the linkspan is attached.

Interestingly there are many solutions available to engineers depending on port, nature of the seabed, tidal range and ship characteristics. In Fishguard in South Wales the link is provided by a jack-up rig. This consists of four legs that literally sit on the sea floor and are simply 'jacked-up' on ratchets at each corner, step by step, until the right height is achieved for the prevailing tidal conditions.

The cellular concrete filled floating pontoon at Killinghome is a massive 80 x 30 metre structure, which is connected to the land by an 80 metre two-way bridge that pivots up and down as the pontoon rises and falls with the tides.

Linkspans can be designed as permanent, mobile or floating structures to provide direct or indirect access to all RoRo ferry cargo decks.

Next time you take a ferry on any of the 750 routes offered by Freightlink, take a moment to wonder at the ingenuity and skill of the designers and operators of these incredible feats of engineering. Without them, the schedules of the best ships and ferries would be severely compromised.