"And now the Shipping Forecast, issued by the Met Office on behalf of the Maritime and Coastguard Agency at 00:00 hours today..." 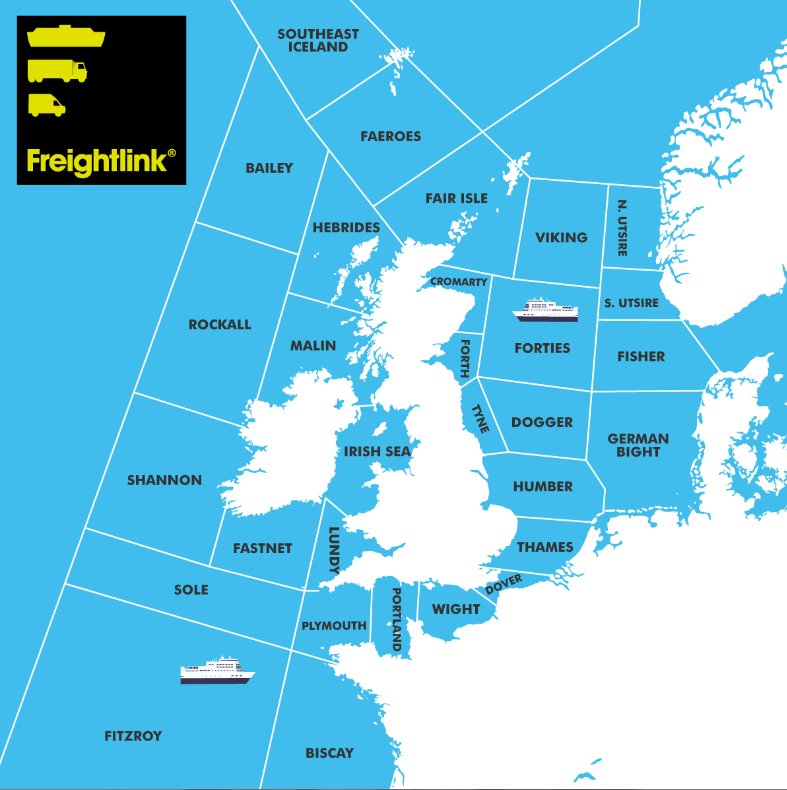 Familiar words to us all and one of the most important public information services listened to by millions of people every day. Recent windy conditions once again raise awareness of how weather conditions can quickly change and to an island nation that relies upon international trade the Shipping Forecast is crucial to all ship operators. This is especially true for the freight and passenger carrying ferries that operate between Great Britain and Ireland and the Continent, as well as all users.

Now 151 years old, the shipping forecast is broadcast 4 times a day on the BBC but originally in 1867, before the invention of the wireless, it was dispatched by telegraph wires direct to harbours to warn ships of impending storms. Never more than 380 words, the shipping forecast has become a national institution but in spite of its longevity, many people don't always understand exactly where each sea area is located nor do they understand the language of the broadcast.

The 'General Synopsis' names these sea areas and this is followed by the barometric pressures for each. The force of the wind is measured using the Beaufort Scale - anything above 8 would be significant starting with gale force 8 and rising to Hurricane force 12. Changes in wind direction are determined by the words 'veering' and 'backing', being clockwise and anticlockwise respectively. Precipitation (rain) and visibility forecasts are then given.

So what should we pick up on when planning trips to anticipate any disruptions to ferry sailings. Well, the easiest way is to look out for Freightlink updates or follow the advice of our customer services team. But if you happen to listen in to the shipping forecast broadcast daily at 00:48, 05:20, 12:01 and 17:54, don't be too concerned about outlying areas such as North Utsire or Trafalgar! The key areas affecting ferries to and from Ireland would include Malin (Northern Ireland and Scotland) and Irish Sea, while between Great Britain and the Continent, from north to south, listen out for Forth, Tyne, Humber, Thames, Dover, Wight, Portland, Plymouth and Biscay.

Remarkably the Shipping Forecast claims to be the longest running continuous weather forecast in the world!