Ferries of the Western Mediterranean Sea

The Western Mediterranean Sea acts as a shipping corridor for a number of European countries.

The area, which is comprised of Spain, Canary Islands, France, Morocco, Corsica, Sardinia, Malta, Sicily and Italy is not just a location for holiday goers but is also a hub for freight transport links. 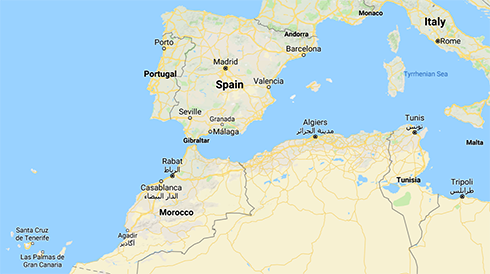 Ferry companies operating in this region include -

Adria Ferries – Founded in 2004, Adria is an Italian shipping company that connects the Italian ports of Ancona, Bari and Trieste with Durres, Albania.

Africa Morocco Link – A newcomer to the game after forming in 2016, the company is a subsidiary of the Attica Group, who own some other ferry operators in the area.

Balearia - A Spanish shipping company which operates both passenger and freight vessels. The operator travels between the Med and the Caribbean.

Caronte & Tourist - Formed by the merger of two historic Italian shipping companies Caronte and Tourist Spa, the C&T ferries travel between the Strait of Messina between Villa San Giovanni and Messina.

Corsica Ferries – This operator has been transporting freight to Corsica and Italy since it took over the Corsican Mediterranean Maritime National Company in 2016.

FRS Ferries – Made up of three separate entities, FRS operate mainly off the Strait of Gibraltar with a fleet of five ferries.

Grandi Navi Veloci – One of Italy’s most profitable shipping companies. First formulated in 1993 with the ship Majestic, the fleet has grown ever since offering in excess of twenty five crossings across the seas.

La Meridionale – Founded in 1931, the ferry company services the Corsican ports of Bastia, Ajaccio, Propriano, Porto Torres and Sardinia too. The company took to the waters at the start of 2017 with a brand new livery for the first time since its creation.

Moby Lines - An Italian shipping company, Moby operates between Italy and France, touching on the islands of Elba, Sardinia and Corsica on the way. Since 2006, their vessels have also been the face of many beloved Looney Tunes characters, so next time you see Bugs Bunny or the Tazmanian Devil floating past you, you’ll know exactly who’s sailing by.

Naviera Armas – Founded in 1941, Naviera Armas offers ferry connections between the Canary Islands and Spain. They are due to imminently release the new ship the Incat Hull 091 which will bring their ship count up to twelve vessels.

Virtu Ferries - The Maltese ferry operator was founded in 1988 and operates between Malta and Sicily. Virtu offers an additional six month seasonal service between Venice and various Adriatic ports.

As you can see, we have the West Mediterranean covered. Where do you want to go?