Are 'Trucker Hotels' the Answer to the 45 Hour Rest Rule?

One of the ideas currently on the table to meet the Drivers' 45 hour rest rule is to build 'trucker hotels'. This proposal however is proving controversial.

Although the weekly rest break may still include using the truck cab to sleep in, the rest period must be taken in a formal rest area such as a service area or truck stop. Drivers who ignore this policy face sanctions including fixed penalty notices of £300 (RHA). 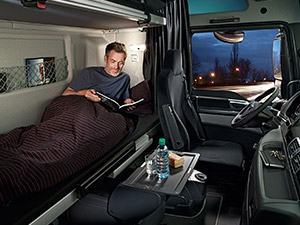 One of the options being investigated to meet the EU Drivers' Hours is to build hotels specifically designed for HGV drivers.

Don Trucking, a company with branches in Poland, Germany and the Netherlands is investing in hotels for drivers, which will be specifically designed to provide what is required for a 45 hour rest.

With around 150 of their drivers based in Poland and Romania, the hotels will allow drivers to get an evening meal, breakfast and a good night's sleep without having to go home at the weekend. A gym and entertainment area will also be provided. No alcohol will be sold or allowed on the premises. In addition, HGVs can be safely parked in a fenced and monitored truck park nearby.

In addition to Don Trucking, the Austrian company Asfinag is also working on a hotel project for drivers. Their focus is on bunk beds with blinds for privacy, internet access and showers. However, when these facilities were opened to Dutch drivers, the feedback wasn't positive.

One concern is that one of the reasons for the 45 hour rest rule is to ensure that drivers are both physically and mentally refreshed after a long working week, and before the start of another one. If a driver is not going home to see their family, to relax, to eat healthily etc there is a risk of fatigue, which is a danger not only to themselves but also to other road users.

What do you think about trucker hotels as a solution for the 45 hour rest rule? Is it a step too far?