One of the busiest parts of the UK motorway network is set to install traffic lights in a £7m trial. Situated at the Croft Interchange between the M6 and M62, the Highways England will launch the trial next month. 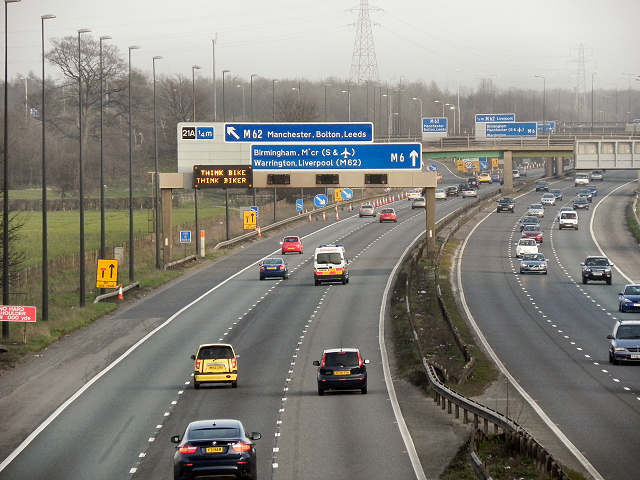 It is thought that the scheme has come at the right time. Official figures confirm that traffic on the UK’s roads has hit record levels with drivers saying journeys are becoming more arduous and time-consuming. In October, Inrix (who record traffic data) found that in the last 12 months there has been 1.35 million traffic jams on Motorways and A roads. A figure that equates to 3,700 a day. Motorways have suffered the greatest increase with 61 per cent of motorists saying congestion and journey times have worsened in the last 12 months (RAC Motoring Report).

The new proposals look to ease traffic queues at the notoriously busy Croft interchange, where Junction 10 of the M62 meets Junction 21A of the M6. When congestion occurs or is predicted, newly installed electronic signs will display compulsory lower speeds. As part of the second phase, traffic lights will be switched on at the end of the link roads from the M6 on to the eastbound M62.

The system was recently tested and will be turned on in December and throughout January. The traffic will then be monitored by Highways England. If successful, traffic lights could be rolled out on motorway link roads across the country.

Do you think this is a good idea? Would it reduce journey times? Tell us what you think